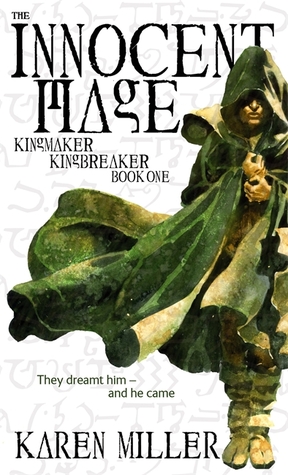 The Innocent Mage by Karen Miller

Ever since the coming of the Doranen and their magic to Lur, the Olken have all but forgotten they too have a magic, of a kind, of their own. Only a select few Olken still know the secret of their heritage, these select few call themselves the Circle. The members of the Circle, are lying in wait for the prophecy of The Innocent Mage to be fulfilled and their heritage reignited. Guided by Jarvale’s heir and her loyal assistant, The Innocent Mage, Asher, is on his way to fulfilling Jervale’s prophecy, becoming The Innocent Mage, the Circle have been waiting for.

As you’d expect, Asher is destined to face evil of a sort, as part of the prophecy. In this case the destroyer of the Doranen’s homeland and the once lover of Barl, the Godlike protector of Lur( the Doranen’s current home) is that evil. However the journey to this point in Jervale’s prophecy will no doubt be long and arduous, full of challenges, hardship and defeat. Throughout this journey to fulfilling prophecy, even at the direst moments, Asher, The ‘Innocent’ Mage, can never find out his destiny and part in the prophecy or else he will no longer be an ‘innocent’ mage, altering the prophecy and dooming them all. Thus making the job of guiding Asher, The Innocent Mage to defeating evil, all the more difficult. Jervale’s heir has to silently and effectively bring the seventh son of a lowely Fisherman into employment in the royal household, without revealing her hand of her cause, to anyone, Asher or not. If she fails the whole of the free world is doomed, never mind her precious Circle. No pressure!

TEEN OVERVIEW: Hilariously funny. However strangely (when in comparison with other similar novels), Miller built up the tempo and intensity of the book, only to have the resulting climax in the subsequent novel. However unorthodox the approach to writing a novel or short story, the lingering uneasy effect it had on me changed over time. I was now fully capable of seeing the whole story for what it was made of and not the route it took. In other words by stepping off the beaten track, Miller as avoided any sense of ‘déjá vu’ by avoiding creating a cliche story line, which would take away from the mastery of her ‘build up’ to the climax and the actual content of her novel. As strange as it sounds, it’s effect actually seems to have worked, for me at least! Will it work for you?