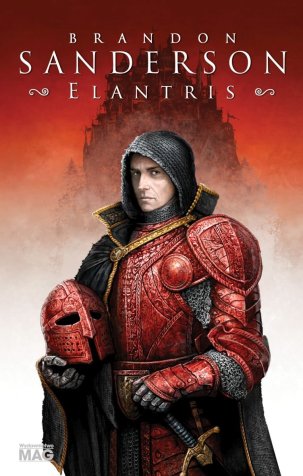 Elantris was once the center of magic for the world, it’s city famous not only for it’s magic capabilities but, it’s scientific advancements too. The Elantrians, as they soon become known as, were the people who lived in the infamous city and who provided everything, everyone else who wasn’t an Elantrian could possibly need, at the click of their fingers. This meant no one really had to work at all, nor fear an invasion from Fjorden and everyone was fed and looked after by these beings of legendary power, what was their not to like about a life such as that? The inhabitants of Elantris were soon treated as nothing less than gods.

That is, until their wasn’t any Elantris anymore. People now had to re-learn how to grow and cook themselves, all the while remembering how tantalisingly good life had been, only a few years ago. Many felt that this was the end of Arelone as an independent state and it was only a matter of time before Arelone was just another small insignificant piece of the opressing Fjorden empire. While others still hoped this catastrophe was merely a test of the Elantrian’s devising, to see who was truly loyal to them and it was only a matter of time before Elantris was once again the seat of power of all the known world…

Elantris follows the journey of the Prince of Arelon and the Princess of Teod, who were all set and ready to get married, to unite their two nations, the only two still independent from the dominant Fjoden empire. Unfortunately however for the success of the treaty and the fate of the two nations, Prince Roaden of Arelon dies under mysterious circumstances shortly before Princes Sarene even arrives in Kae, the capital of Arelon. Meaning Roaden died before the two can even get married, unsettling the future of the treaty and the two nations. Luckily however the marriage contract planned for this very situation, meaning the treaty still stands… for now.

The treaty will last so long as Sarene can stay in Kae, which means no visits to her homeland or to her beloved father for the rest of her days. As well as this the treaty will only last so long as she never remarries in her lifetime, a lot to ask of anyone, especially one so young and potentially inexperienced in this field. How long will it be before Sarene lests her gaurd down, destroying any potential future for the two nations?

From the little amount of information Sarene can gather about Roaden’s death, it isn’t hard to tell that there’s something amiss but, the real question is, what? Could the sudden, miraculous appearance of the Fjorden high priest have something to do with Roaden’s suuden, unexplained death? Could there be more to it? What if it was a setup? And more importantly, Roaden’s father, the King himself, why wasn’t he nearly as sad as he should have been at his own son’s Funeral? Could he have something to do with his son’s sudden death?

Teen Rating: An ordinary enough fantasy novel, until you’ve read to about a quarter of the way through, then things really start to pick up and really become interesting! Extremely addictive. 13+ 4.3/5